A ever curious entrepreneur and inspiring leader

A highly engaging executive, with profound entrepreneurial experience, an undisputed visionary, is always thinking beyond the immediate impact but long term global implications of any of the technology evolution he touched.

“I enjoy the fact that I have no more than 7 years experience in anything. More would cause a too much effort to re-train my neural connections.” :)

For the next 7 years I’m enter again a new experience world: Neuroscience. Like the technology revolution before, the discoveries and understanding how our brain works, will – again – change our lives more radical than anything before.

DEEP INNOVATION DESIGN
After successfully testing techniques and methods to help others create disruptive business models and create profoundly innovative solutions, he started a research project in 2017 to find out how the brain is actually creating and processing ideas. Thanks to latest discovery in neuroscience and comparing those with his own idea processes as well as processes from other innovators, he developed whats called “Deep Innovation Design” model. The deep innovation design model is leveraging neuroscience know how with behavior know how and allows creating innovative ideas on demand.

INNOVATION & DISRUPTION
1983 he disrupted the global distribution business model by creating a new business model that exclusively sold through authorized sales partners. What’s standard today was perceived to be impossible back then. His startup, Computer 2000 bypassed soon multi hundred million $ international distributors with only $25,000 seed capital. 10 years later Computer 2000 grew to $5 Billion in revenue, by far the largest technology distributor in Europe and the third largest in the world.

1996 he founded Infinigate, the first “Value Added Distributor” a hybrid business model between high volume product distribution and a service organization that delivers services and education for highly complex products. What was thought to be impossible is today’s largest high end cyber security provider in Europe.

1997 he built the first digital stock exchange in the world. He was the first to bring the concept of disruption to the financial services industry.

All four businesses, their innovative concepts and their disruptive business models were thought to be completely unrealistic. All four companies became market leader in their respective space.

2016 for the first time he applied a newly developed method to create disruptive business models with a 50% success rate in his startup accelerator program. In 2017 the model of targeted innovative thinking lead to a whole new model of ‘Deep Innovation Design’

ENTREPRENEURSHIP
Axel Schultze was founding, scaling and successfully exiting four companies, the biggest grew to $5 Billion in revenue. All four where highly innovative and had disruptive business models. Thereafter he and his wife began helping hundreds if not thousands of entrepreneurs from 30+ countries, to better understand the concepts of entrepreneurship, building dream teams, creating unique solutions, bringing them to market and becoming a contributor to their county’s economy and prosperity. Living most of his entrepreneurial live in Silicon Valley, he became a top expert in entrepreneurship.

ECONOMIC DEVELOPMENT 4.0
After founding the World Innovations Forum Foundation, and living a digital live for more than 30 years, Axel was asked to apply his experience and expertise to economic development in developing and emerging nations. With his innovation background, he is now connecting ways to innovate with economic development. As a result, he developed highly effective entrepreneurship programs creating an exceptional Impact effectiveness. It not only accelerates young entrepreneurs to clearly better results, it shows also why the traditional development aid to help developing countries actually could not work as anticipated. This is still work in progress – with good progress so far.

SOCIAL MEDIA
As a first advisor to LinkedIn in 2003 and early beta or even alpha user of most social media platforms, he was named one of the “Founding fathers of Social Media” in 2006. He initiated the first Social Media Academy in Silicon Valley in 2008 which eventually became Society3. His unique and innovative thinking helped create several social media methodologies which are still used today in leading enterprises. The program was independent of platforms and tools but focused on the social interaction behavior social attributes of human beings and how “social” can be emulated online to increase connection strength over long distances. Together with his wife Marita, who developed the concept of a “Digital Body Language”, they helped hundreds of enterprises to become more social in their customer experience. Today he still runs the world’s largest Customer Experience Management Group on Linkedin with over 100,000 members.

Axel Schultze is Founder and CEO of the Society3 Group and the chairman of the World Innovations Forum Foundation. He was a very successful four times entrepreneur with four exits, one IPOed. Axel is a published author, patent holder, was named one of the globally most influential startup accelerators in 2015, won the SF Entrepreneur Award in 2008, and an early adviser of LinkedIn. After founding 4 highly innovative and disruptive businesses, he began to research how our brain is composing and processing innovative ideas and how this can become a repeatable process. In early 2020 he formed the Deep Innovation Design model and is currently writing his second book on innovation. 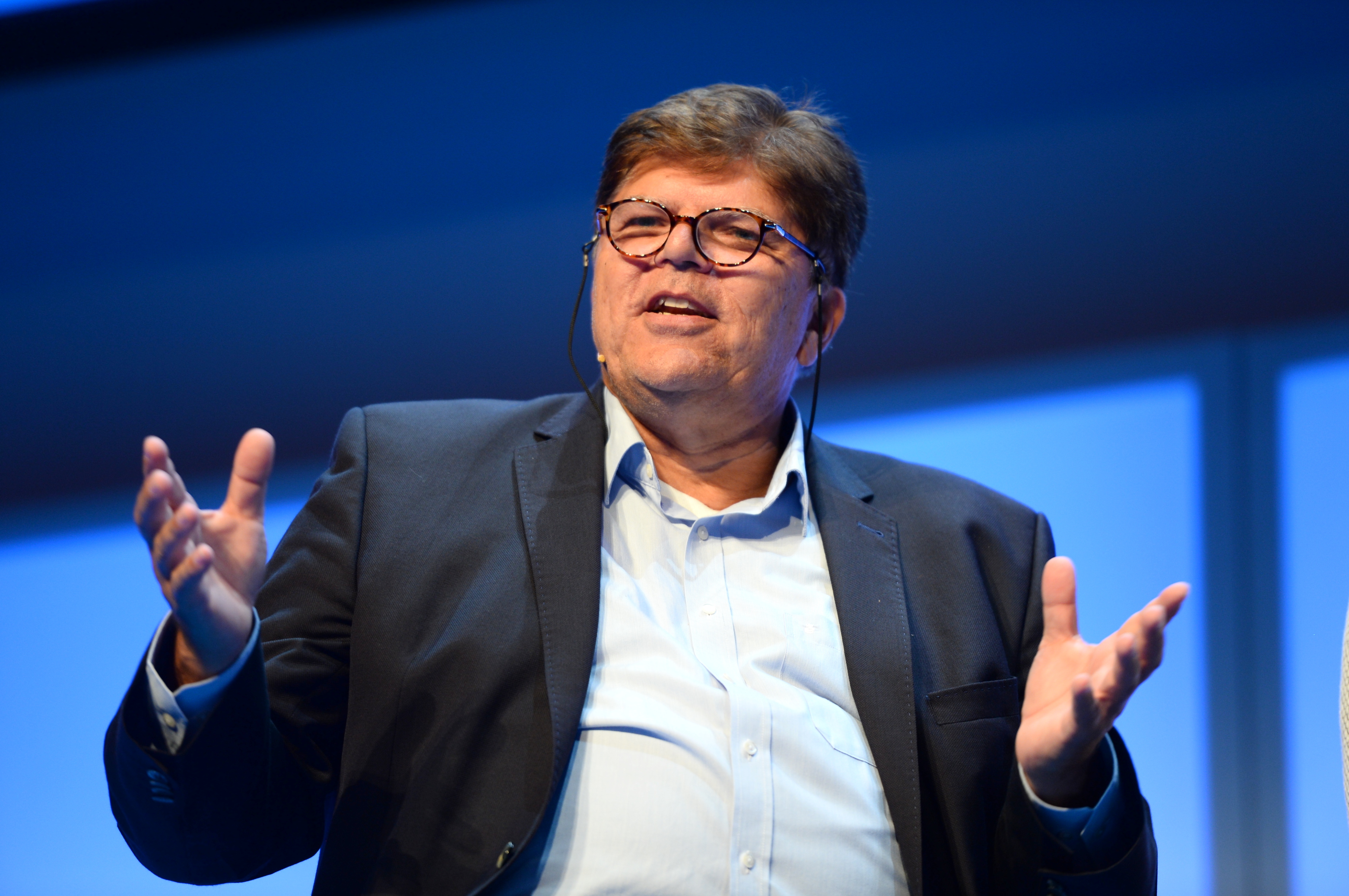 founder and CEO of the Society3 Group AG and + Chairman of the World Innovations Forum Foundation. Axel started and successfully exited 4 companies, the biggest reaching $5 Billion in revenue and is a $37 BIllion company today, his second company close to $1 Billion.

Axel is also a published author, patent holder, he was 2015 listed in the global 100 most influential startup accelerators and won the San Francisco Entrepreneur Award in 2008, he chaired the SaaS  Committee at the Software and Information Industry Association SIIA and was a founding adviser to LinkedIn.

After spending most of his business life in Silicon Valley, he is now on a quest to find out how the brain is creating and processing innovative ideas and how those ideas may become disruptive to an entire industry segment.

Axel Schultze is Founder and CEO of the swiss based Society3 Group and Chairman of the Board of Trustees in the World Innovations Forum Foundation, a Swiss based Innovation & Entrepreneurship development organization (non-profit). He lived most of his business life in Silicon Valley and after retirement in 2014, he founded the Society3 Group as Startup Accelerator, helping young entrepreneurs to grow beyond their own perceived limits. He was a very successful four times entrepreneur with four exits, one IPOed. He founded Silicon Valley based BlueRoads, one of the most successful Channel Management Software companies. In the late 90’s he created the world’s first digital stock exchange Webstock. With the inception of the Internet,  he was founder and CEO of Infinigate one of the largest IT Cyber Security provider in Europe, (today over $500 Million in revenue). In 1983 he founded  Computer 2000, the third largest technology distributor, which grew to $5 Billion in revenue and merged with TechData in 1998, today $37 Billion in revenue.

Axel is a published author, was granted patent 9514997 for lead management, by the US Patent Office, was named one of the globally most influential startup accelerators in 2015, won the SF Entrepreneur Award in 2008. He chaired the SaaS Channel Committee at the Software & Information Industry Association (SIIA), was an early adviser of LinkedIn in 2003 one of the first executives authoring a blog.

After founding 4 highly innovative and two very disruptive businesses. he began to research how innovation is created and how one can help others to be more innovative. Four years later, early 2020 he formed the Deep Innovation Design model and wrote two books about Innovation Design and the Innovation Journey Map.

Axel Schultze held countless keynotes and other speaking engagements. Here are some of the TV and Keynote speech engagements:

SPEAKER REQUESTS
Please be so kind and let us know:
* What – Where – When
* Audience – Size – Expected Outcome
* Why Axel

SPEAKER FEES
Speaker fees depend on the ‘fun factor’ and other values
In any case, you will need to pay all travel expenses.

Please send us a message to:  engaging at axelschultze com